People were skeptical about the marijuana industry’s prospects from the start of legalization, with many worried about its usage among youngsters and rising crime rates. Surprisingly, the time has shown that the positive effects were immediate.

More and more states have jumped on board, with 36 states now allowing medicinal marijuana use in their jurisdictions. In Arizona, if you visit a Scottsdale Dispensary, they often have lines specific for medical patients. However, this trend is not without its drawbacks, one of which is the real estate crisis.

The Effects of Legalization on The Real Estate Industry

The real estate industry is largely influenced by buying patterns and local rules and regulations, so landlords and brokers always monitor how things are progressing. Thus, the ever-changing nature of the marijuana sector will likely have an impact on the real estate market.

The marijuana industry is also affecting landlord policies on residential rental properties. In states where both recreational and medicinal marijuana was legal before 2016, 48% of landlords are banning smoking inside the property, and 43% are banning marijuana growing.

Landlords develop such rules in response to challenges in renting their properties. The most prevalent concern was the odor, followed by moisture problems. Both problems were more prominent in regions where recreational marijuana use has been allowed from before 2016.

It is also worth noting that on properties where marijuana consumption and cultivation are permitted, nine out of ten property owners agreed that the renters would be responsible for the utility costs. In addition, 11% of them require their renters to grow marijuana in a self-contained box.

The marijuana business, on the other hand, had a favorable influence on the commercial property sector. Up to 36% of respondents in states where recreational and medical marijuana use is allowed reported an increase in demand for land, warehouses, and storefronts.

The greatest rise in demand happened in places where prescription marijuana usage was recently implemented. However, a large proportion of respondents indicated no growth in commercial property demand, while a lower percentage reported a decrease.

Even though the marijuana sector appears to be boosting the real estate market, property owners are still concerned about leasing their space to marijuana-related businesses. The odor is the most serious concern in the residential sector, followed by moisture and fire hazards.

If you are doing research on where to find a nearby dispensary be sure to check out our main page! Finding a location to start a marijuana business is not an easy task. Property owners and potential marijuana retail operators must be aware of the complexity of both the real estate and marijuana industries.

Searching for the ideal marijuana dispensary locations has proven to be quite difficult in the past. Many localities have officially restricted the development of marijuana sales which significantly limit the location options for marijuana business owners.
.
Even today, when Congress looks to be on the verge of legalizing marijuana on a federal level, things remain challenging. Regardless of what Congress decides, local authorities will probably continue to control the legal marijuana sector, including the housing market that can be used for such purposes.

Dispensaries must also fulfill municipal zoning restrictions for such retail establishments in places that allow them. Furthermore, the legislation requires that marijuana retail locations be located a specific distance away from schools, daycare facilities, churches, public libraries, or recreational areas.

Other suitable properties were also unavailable due to the owners’ ideological opposition to marijuana. As a result, the few viable locations that were available were the subject of fierce commercial competition.

Needless to say, the federal prohibition on marijuana affects real estate finance. This is also true for lenders, sellers, and purchasers who seek title insurance.

All of the above complications mean that all parties must grasp the issues involved in a marijuana-related real estate deal. Marijuana cultivation, production, and retail dispensing are all distinct industries with their own administrative, licensing, and tax regimes.
While some states do not yet allow recreational marijuana, the legal and policy contrasts between medicinal and recreational marijuana can be equally relevant in other places. The influence on surrounding businesses and neighborhoods and any contractual or deed limitations must also be considered.
Some permit holders have been left high and dry as a result of zoning laws. This is due, in part, to a lack of cooperation between where the state identified a need and what cities desired.
It can take time and money for businesses to discover suitable sites and then prepare for the zoning procedure. This phase alone can cost $100,000 to $150,000, largely in zoning legal costs. To complicate things further, property owners sometimes charge two to three times as much when they know the space will be utilized for a marijuana business.

How Marijuana Enterprises Can Solve The Issues 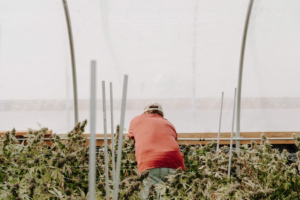 The marijuana industry’s challenging climate should not deter entrepreneurs from enjoying the business’s green future. There will always be a solution to the real estate problem in this area.

At this point, it is not a matter of whether or if this marijuana and real estate connection will last. Now is the moment to see how large the marijuana business can go and its influence on society in the future.

Here are some tips on how to solve the real estate problem of your Marijuana business:

Even if marijuana is legal in your state, towns may choose to prohibit the existence of marijuana stores. In Michigan, for example, more than half of the municipalities have already opted out of allowing marijuana dispensaries.

This issue might ruin your business plan if you are unaware of it. As a result, before committing time and energy to the project, make sure the city you are in is actively accepting license applications.

Even if your potential company is not in a “no” zone for a dispensary, you must still check over your local zoning rules. Before contacting a landlord, always conduct your research and ensure that the site is compliant.

Finding an approved site does not mean you can open your business right away; you need first to investigate the demographics of the region to get a sense of the kind of clients that may be arriving. You should conduct some market research to ensure that you choose the most profitable site.

If you have the option of choosing between numerous sites, choose the one that best meets the demands of your target market. Of course, given zoning constraints, it may not always be possible to choose where you hoped to be.

Remember to choose a place that is as near to your target population as possible. A college town may make more sense if you want to appeal to the young and hip community. Also, try to be aware of the nearby shops and who you could be competing with.

The sector is still in its early stages, and many landlords are unwilling to participate. Finding a landlord ready to collaborate with cannabis merchants is an often-unanticipated obstacle in acquiring a dispensary site.

This is not to say that you wouldn’t be able to locate a suitable landlord eager to collaborate with a cannabis store. The key is to keep trying, be absolutely honest about your plans, and speak with as many people as you need to obtain answers.

You should be aware that if the property is not funded through a cannabis-friendly financial institution, there may be considerable resistance to doing a lease. This is why brokers normally just say ‘no’ to marijuana, although successful deals have been made by engaging with the owner.

Opening a dispensary is not for the faint hearted. Like with any part of launching a business, the key is to formulate a strategy and be ready for a rigorous process. More significantly, because things may not always go as planned, you should be open to new ideas. If you can not find a suitable place downtown, look elsewhere.

Let us have a look at how Green Thumb Industries transformed an abandoned jail in Warwick into a growing and processing facility. The corporation even secured a $50 million financial incentive to establish the factory, which would employ around 125 people full-time.

Another example is Quality Roots’ conversion of the Farm Bureau building into a marijuana dispensary in Ypsilanti. The company plans to replace it with a consumer area where marijuana products may be used legally and a cannabis growing and processing facility on the property.

As the marijuana business advances, commercial and residential property owners are balancing measures to benefit from the changes. Changes are made while also ensuring that their property stays appealing and valuable.

The future is entirely dependent on whether or not federal legalization is enacted. Depending on how the regulatory body manages license administration, certain jurisdictions may face a similar kind of marijuana-related real estate situation where investors’ money is pouring in first. But eventually, they will thin out and, finally, quit the industry.

In conclusion, there are numerous opportunities in the marijuana industry. However, choosing the best alternative is not always easy, especially when it comes to selecting a location. Having an experienced staff that understands the regulatory complexity of the sector is crucial for companies looking to enter the market.

Latest posts by waseem fazal (see all)
marijuana industryreal estate
Prev post How Do You Use Delta-8 THC?
Next post Cannabidiol (CBD) how to use cbd oil for pain under tongue