Differences between hemp and marijuana

Hemp and marijuana, two plants that can give rise to confusion, because although they belong to the same genus, the differences both at a morphological level and in the composition of their active principles, have meant that these two sides of the same coin have very different uses.

In this post, we explain what the differences are between hemp and marijuana, and how they influence the use and cultivation of the plant. Keep reading!

Do hemp and marijuana belong to the same genus?

Actually yes, they both belong to the same family, Cannabis. Sativa. L, although these two plants present differentiating features that distinguish them as two varieties. These differences have been accentuated through hundreds of years of selection and domestication since while hemp has been cultivated and molded in order to obtain raw materials (seeds, oil, fiber, cellulose …), in the case of the pot has been sought to enhance the psychoactive effects and its cultivation and selection have focused mainly on increasing levels of THC. 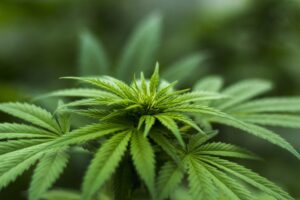 What are the differences between hemp and marijuana?

Hemp and marijuana differ by their morphology, by the use that is given to the plant and by its composition, because until very recently, marijuana was characterized by its high THC content, the cannabinoid that causes the psychoactive effect, while in hemp the levels of THC are very low. That is why hemp has been cultivated to obtain raw materials, while in marijuana the effect produced by the consumption of its flowers has been sought, either at a medicinal or recreational level.

Before the so-called “Wave of CBD”, it was very easy to distinguish these two varieties through an analysis of the composition of cannabinoids, because while marijuana had high levels of THC and a low percentage of CBD in the case of hemp, the opposite was true. However, since the new CBD-rich marijuana strains have entered the market, this has ceased to be a distinctive feature, since there is already marijuana genetics such as Dinamed, with high levels of CBD (up to 14%) and very little THC (below 0.5%), and yet they cannot be considered varieties of hemp.

Hemp, also called industrial hemp due to its many applications in this field, can be a very important renewable source of raw materials; a sustainable alternative for the ecology of the planet, and very useful at an industrial and nutritional level. The structure of hemp is the result of a domestication process that dates back thousands of years, in which humanity has been shaping the population to get the most out of the plant, in order to produce oils, fibers, and cellulose, which at an industrial level have multiple uses.

Morphologically, hemp tends to be taller than marijuana and can reach up to 5 meters in height. The stalks of hemp are thicker and less hollow, do not have as many branches as of marijuana plants, and just have flowers. However, the morphology of hemp also varies depending on the objective of its cultivation:

Hemp varieties are grown for fiber:

Hemp grown for this purpose resembles marijuana but has less branching and fewer flowers. It is also grown with a high degree of density.

The varieties for the extraction of oil and cellulose or bases of woody materials:

Genetics grown for this purpose are characterized by having a denser stem.

Differences in growing hemp and marijuana:

The hemp is cultivated in general to a very high degree of density, ie plants grow very close to each other, they are little branched plants and therefore the results are very thick fields. On the other hand, in the cultivation of marijuana, more space is left between plants so that they can develop correctly, marijuana has more lateral branching and more abundant and voluminous flowers.

At culture From marijuana, plants with male organs are normally eliminated to avoid pollination, since in most cases what is sought is to obtain the flower without seeds. By not being pollinated, marijuana plants continue to produce large flower clusters, the highly prized seedless buds that are used so much for medicinal as recreational.

On the other hand, in the cultivation of hemp, the pollination of female plants is allowed, with the aim that they produce seed since it is one of the products that is most used from this plant.

Accidental pollination between hemp and marijuana plants always results in a reduction in the potency of marijuana (on a psychoactive level). 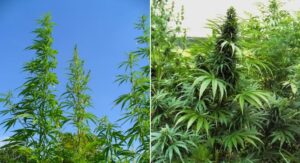 Hemp is a plant with multiple possibilities, let’s see some of them:

Hemp as a food product:

Hemp seeds and oil are not only suitable for consumption but also have a high nutritional value. In fact, hemp oil is rich in polyunsaturated fatty acids, especially linoleic acid (Omega-6) and alpha-linolenic acid (Omega-3). Two fatty acids that have been shown to have very beneficial properties for the body. Additionally, hemp seeds and oil also contain gamma-linoleic acid, which is used to treat ailments such as neurodermatitis, arthritis, and premenstrual syndrome.

Hemp as a base element in industrial production:

Like flaxseed or cottonseed oil, hempseed oil can be processed into countless products such as biodiesel, soap, cosmetics, paints, and varnishes.

Using the woody center of the hemp stems and barks, biodegradable paper and plastic can be made. The fact that it is a renewable and environmentally friendly material makes it very attractive and competitive, especially due to the serious environmental problem that plastic is causing on the planet.

The strong natural fiber in the stems can be the basis for recyclable and biodegradable textiles, clothing, canvas, rope, and building materials. The strength and durability of hemp fiber cannot be matched by any other natural fiber. The rope and canvas (canvas), made of hemp, has been used for thousands of years in all types of boats for its durability and resistance to deterioration produced by the salt of seawater.

Today, hemp fiber textile products are considered an environmentally friendly alternative to cotton, as it requires a large number of pesticides and other toxic products). Due to its porosity and absorbency, fabrics made from hemp dye easily and are compatible with natural dyes based on plants and minerals. Large manufacturers like the well-known sports brand Nike have been very successful with their line of hemp textile products.

Natural fibers in composites are also eating away at synthetics, especially in the automotive sector, as they offer the same performance and greater impact resistance. The aerospace industry has also set its sights on natural fiber composite materials, due to their low toxicity in the event of a fire.

Jeans brand Levi’s made its garments with hemp fiber during its early years.

The psychoactive effect produced by THC is what has undoubtedly made marijuana the illegal drug most consumed in the world. This effect has already been used ancestrally for multiple rituals as well as traditional events in different cultures. Today, millions of people use cannabis to relax, to have a laugh with friends, or simply to enjoy the psychoactive effects of the plant. Despite the fact that in recent decades, it has been sought to raise the THC levels of the plant through hybridization and the selection of different genetic cannabis, with the advent of CBD-rich strains, the paradigm seems to be changing. The new recreational consumption model focuses on a more sustainable use that is achieved by raising the levels of CBD and reducing THC a bit. A psychoactive effect that is not extreme, rather pleasant, and pleasant.

Many are the scientific studies that support the medicinal properties of cannabis. Our ancestors already used this plant to treat multiple ailments and, today, it has proven to be very effective for the treatment of various diseases such as epilepsy, neurodegenerative diseases, and even autism.

Latest posts by waseem fazal (see all)
cbdcbd oilhempmarijuana
Prev post CBD vs THC: What’s the Difference?
Next post CBD Oil for the Elderly: Side Effects, Benefits and Characteristics!